Intro
We were asked to superimpose a grid on the video output of an IP camera for this year’s FIRST FRC competition, FIRST STRONGHOLD, a sort of medieval-themed contest with a castle and medieval-inspired obstacles. The present thinking is that a cheap D-Link DCS-931L camera will do just fine. It’s $30 on Amazon. I found this is a real research project because it is poorly documented. So in this blog I show how to do that.

The details
D-Link provides viewing software called D-ViewCam. It has a lot of options, but not the ability to superimpose a grid. It’s more being a security console – allowing views from multiple cameras. Capturing and recording images, that sort of thing. i knew in my heart that there had to be a URL to tap into the camera directly, but it wasn’t easy to find. First I found the URL for a capture image:

and that’s all i could find! I thought, OK, I can work with even that. I’ll build a web page that includes that as source image and refreshes itself as fast as possible! And despite the crudeness o that approach, it actually worked. It was a little laggy (maybe 1.2 s or so) an a little jumpy, but good enough for our purposes. Time permitting, I will share that crude code.

HTML5 video image
But then, somewhat by accident, i found a D-Link blog post where they just happened to mention the URL to a video stream that will work in an HTML5-compatible browser such as Firefox. i can’t believe how hidden they keep this URL. It is:

Then I found a Stackoverflow page that described how to superimpose a grid in an HTML page using CSS – Cascading Style Sheets. That sounded pretty good to me. Actually that’s what i searched for. I know there are other ways to do it but Javascript gets ugly quickly and other methods are more kludgy. At least with CSS I feel I am learning something about CSS. I am not a web developer, just a fumbler.

It’s Broken on Firefox
So i carefully implement the Stackoverflow code. you have to understand that it’s presented so tidily that you feel there’s no way it could not work. I tried it out in Firefox. No matter how much I proof-read my code, it only drew the vertical bars of the grid, but not the horizontal lines! So Firefox’s either has a bug, or the features of CSS aren’t agreed upon by all major browser vendors.

At some point I came to try my code in Chrome – worked great! That was a shock. But I wanted it to work in Firefox since that is my principal browser. I finally found that for whatever reason, in Firefox the horizontal bars have to be drawn using a different function. Instead of a more simple linear-gradient CSS function which works just fine for the vertical bars, you need to resort to a more complex repeating-linear-gradient function.

so putting all this together we arrive at the html page code. It’s nice and brief.

Well, mostly. This puts a horizontal bar every 80 pixels. If i change that 80px to 15% (which is the parameter in effect for the vertical bars due to the background-size statement), it will work OK in Firefox. However, it does not work in Chrome. With 80px it works in both browsers.

Network info
Needless to say, dcs-931l is just the hostname of the camera, assuming that mDNS is all working which it generally does. You can replace that with the IP address. of course you have to be on the same LAN as the camera. This is not a setup for viewing the camera from the Internet which I haven’t looked into yet. mDNS is multicast DNS. I think this technology or its equivalent is pretty common in home networks these days. It’s a convenient way to assign (and later refer to by that name) a hostname to a dynamic IP address. There’s a Wikipedia article about it which gets pretty technical.

Where to put that HTML page – stupid Notepad tricks
Most people automatically feel HTML pages have to be on a web server, but they don’t. You can put that HTML above into a file on your PC and that’s what we will do. No local web server required at all. I just saved the file as “grid.htm” in Notepad – yes it’s as crude as it gets but I said I’m not a web developer. Yes, anyone who knew anything would at least get Notepad++, but oh well. By the way, to save a .htm file in Notepad just specify All Files and put the name in quotes “grid.htm”. I save it to C:\temp, so the URL becomes:

It shows up a little differently, but that’s what I typed in. And here’s a screen capture of my live video with the grid superimposed, just so it’s been documented as really working! 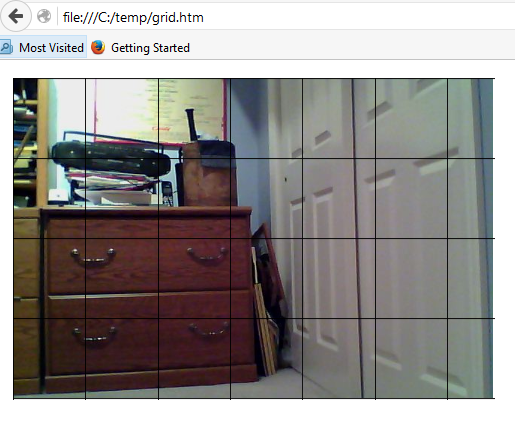 Measuring the lag of the video display
In this blog post I show an accessible technique for measuring lag that only requires two smartphones. I love to show this to students. They get all confused at first, but when you do it you see how obviously simple and accurate it is. So we measured the lag as .51 seconds. So not the best, but not terrible either.

Superimpose crosshairs instead of grid
Now that we’ve set up the basic approach, changing from a whole grid to just crosshairs, with thicker lines is as simple as changing 15% to 50%, plus changing 1px to 2px.

Password prompt
But we still get that password prompt initially when brining up our local web page. Even that can be fixed by embedding the username/passwor dinto the URL. Putting crosshairs and password toegther we arrive at this version:

That is the Firefox version, of course. Replace your_camera_password with your camera’s password. Don’t use a password which contains the “@” character or things will get really complicated!

References and related
Link to competition information, including brief videos.
Cheap but functional D-Link video camera.
Stackoverflow description of superimposing a grid on an image using CSS.
Multicast DNS is described in excruciating detail here.
Blog post on measuring lag and getting streaming to work on the Raspberry Pi camera.

I need grid lines on video out put, I have a video I want to share.
Looking for a way to get 2 horizontal and 2 vertical lines on the video output to compare out put of 2 IP cameras