Intro
SSl Interception is a reality at some larger companies. From a security perspective it is vital as it permits you to extend your AV scanning, botnet detection, 0-day, DLP, cloud security, etc to your https traffic which is normally just an encrypted blur to the edge devices through which the traffic flows.

Bluecoat has a good solution for SSL interception, but it is possible to make some mistakes. Here I document one of those and provide a few other tips.

The details
The general idea is that within your large company – let’s call it “B” – there is an existing PKI infrastructure which is in use. In particular a private root CA has been included in the certificate store on B’s standard PC image. B users use explicit proxy. This is a requirement for SSL interception by the way. Now B’s PKI team issues an intermediate certificate to B’s proxy server such that it can sign certificates. That’s a so-called signing certificate because in the extensions it explicitly mentions:

B’s proxy, when asked to access an external https site by a desktop PC, then acts as an SSL client, decrypts the traffic, does all its AV, 0-day, DLP inspections, then re-encrypts it with its own on-the-fly issued certificate before sending it along to the desktop! In the PKI world, a signing certificate is a big deal because in the wrong hands havoc could result.

Results if implemented badly
You might see this in Internet Explorer for every https site you access: 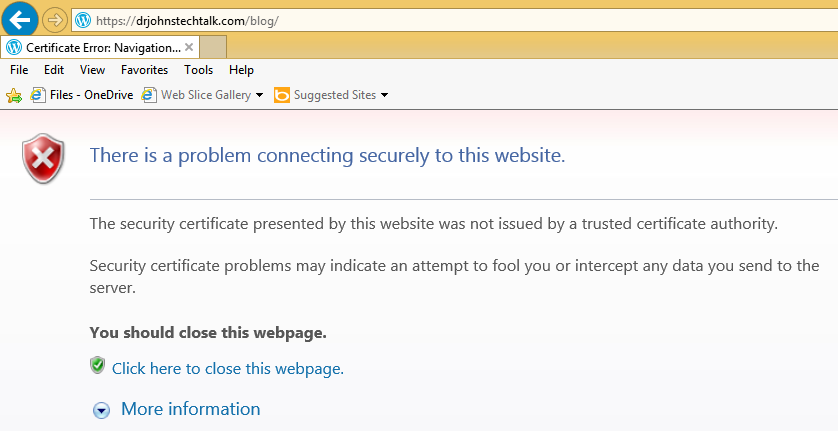 The security certificate presented by this website was not issued by a trusted certificate authority.

Security certificate problems may indicate an attempt to fool you or intercept any data you send to the server.

Looking at the certificate in Chrome (the only way I know how) shows the problem: 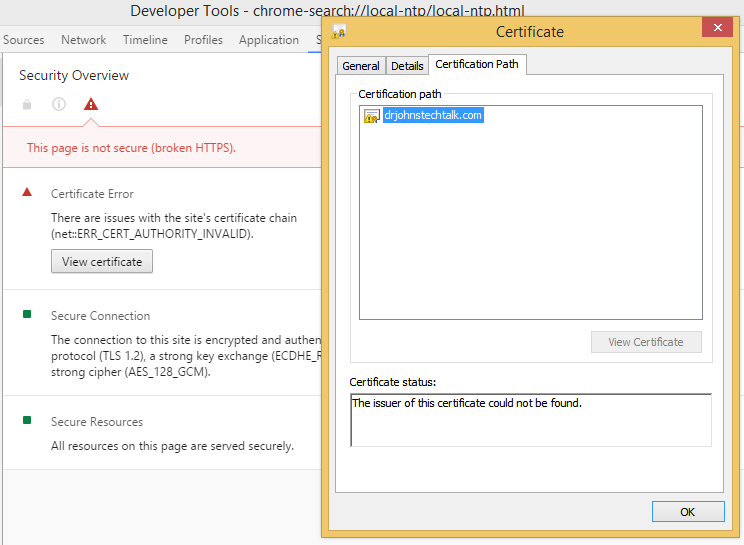 Certificate Error
There are issues with the site’s certificate chain (net::ERR_CERT_AUTHORITY_INVALID).

And indeed in examining the certificate it appears stand-alone. The whole chain should normally be displayed there but there is only the end certificate. So browsers won’t trust it.

What is happening in this case is that the proxy is intercepting, but its not providing the intermediate CERT.

Here is a screen shot showing that the proxy is the issuer for the certificate: 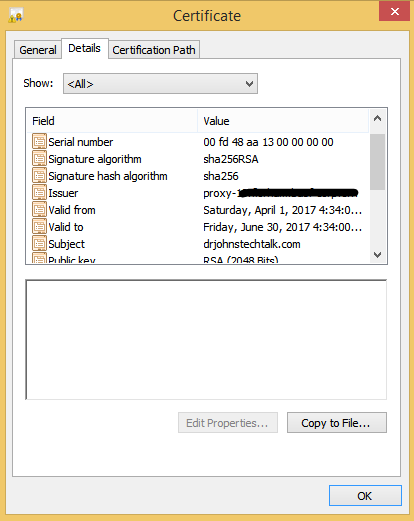 And a view of the certificate chain: 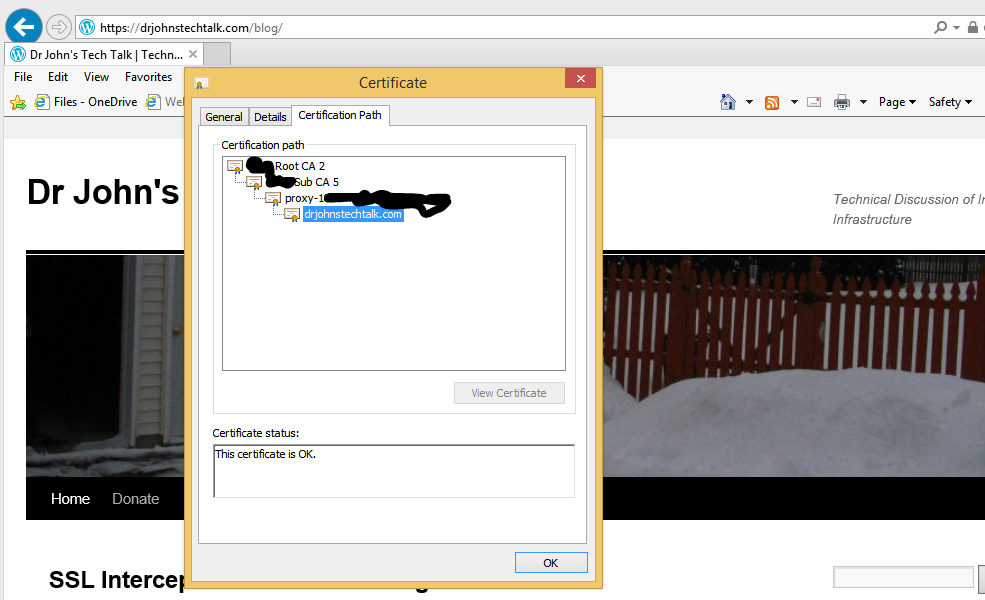 So the guy who normally does this retired and it fell onto my shoulders – getting the new signing certificates installed. I’ll be danged if I didn’t run into the exact same problem and waste an entire afternoon on it. Until. I discovered my own blog post from five years ago! And it still works! And it’s the only place where this specific problem is discussed and a solution presented. Kudos: me! Now Bluecoat -> Broadcom, but it’s the exact same stuff under the hood.

Other tips
We got no results whatsoever when we initiated an SSL layer until we turned on Detect Protocol:

On the other hand we had a site break just from enabling Detect Protocol. Even when SSLInterception was set to action: Disabled.

We found that action: None worked better for these cases. That sets the behaviour back to what you had before you enabled Detect Protocol. The idea being that Detect Protocol invokes the SSL Proxy component of Bluecoat. The SSL Proxy can mess things up a bit for some SSL sites. Our problem was with a Java SSL site.

What about pinned certificates
Certificate Pinning provides the browser an independent way to verify who was supposed to have issued the site’s certificate. This would seem to be a doomsday scenario for SSL interception, but most browsers have built in an exception so that if the browser is on the local network it will ignore the pin.

Great resource for anyone doing SSL interception
There are many scenarios to consider when you have a Man In The Middle. OWS is Origin Web Server in the following. How will it behave if:

A great resource where they’re done the job for you to build certificates with almost every defect you can think of, is badssl.com.

Regrets
Man I wish openssl supported usage through proxy, in particular openssl s_client. But it doesn’t. Examining certificates with the various browsers is a pain, and I don’t fully trust them. For me openssl is truth.

References and related
All different kinds of faulty certificate scenarios to test with: badssl.com

You can now get “real” certificate for free! I’ve used them myself several times: Lets Encrypt

An article I wrote explaining ciphers.

Somehow related to all this is a web site that guarantees to never use SSL, which can be useful when you are using a guest WiFi requiring sign-on and want to hit a “safe” site (a non-SSL site can be hard to find these days): http://neverssl.com/