Intro
I’ve written various articles about SSL. I just came across a way to get your certificates for free, letsencrypt.org. But their thing is to automate certificate management. I think you have to set up the whole automated certificate management environment just to get one of their free certificates. So that’s a little unfortunate, but I may try it and write up my experience with it in this blog (Update: I did it!). Stay tuned.

Short duration certificates
I recently happened upon a site that uses one of these certificates and was surprised to see that it expires in 90 days. All the certificate I’ve ever bought are valid for at least a year, sometimes two or three. But Let’s Encrypt has a whole page justifying their short certificates which kind of makes sense. It forces you to adopt their automation processes for renewal because it will be too burdensome for site admins to constantly renew these certificates by hand the way they used to.

November 2016 update
Since posting this article I have worked with a hosting firm a little bit. I was surprised by how easily he could get for one of “my” domain names. Apparently all it took was that Let’s Encrypt could verify that he owned the IP address which my domain name resolved to. That’s different from the usual way of verification where the whois registration of the domain gets queried. That never happened here! I think by now the Let’s Encrypt CA, IdenTrust Commercial Root CA 1, is accepted by the major browsers.

Here’s a picture that shows one of these certificates which was just issued November, 2016 with its short expiration. 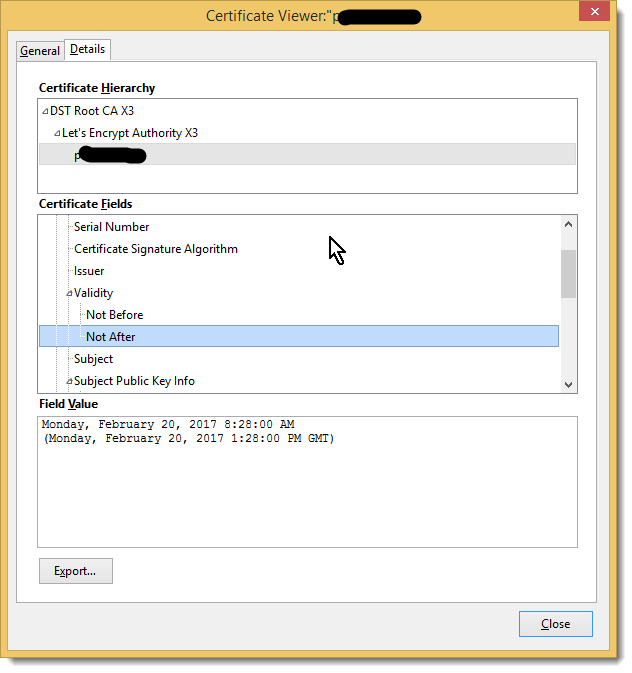 My own experience in getting a certificate
I studied the ACME protocol a little bit. It’s complicated. Nothing’s easy these days! So you need a program to help you implement it. I went with acme.sh over Certbot because it is much more lightweight – works through bash shell. Certbot wanted to update about 40 packages on my system, which really seems like overkill.

I’m very excited about how easy it was to get my first certificate from letsencrypt! Worked first time. I made sure the account I ran this command from had write access to the HTMLroot (the “webroot”) because an authentication challenge occurs to prove that I administer that web server:

Behind the scenes the authentication resulted in these two accesses to my web server:

The first was HTTP which I redirect to https while preserving the URL, hence the second request. You see now why I needed write access to the webroot of my web server.

Refine our approach
In the end iI decided to run as root in order to protect the private key from prying eyes. This looked like this:

What’s a nice feature about acme.sh is that it remembers parameters you’ve typed by hand and fills them into a single convenient configuration file. So the contents of mine look like this:

References and related
Examples of using Lets Encrypt with domain (DNS) validation: How I saved $69 a year on certificate cost.
The Let’s Encrypt web site, letsencrypt.org
When I first switched from http to https: drjohnstechtalk is now an encrypted web site
Ciphers
Let’s Encrypt’s take on those short-lived certificates they issue: Why 90-day certificates
acme.sh script which I used I obtained from this site: https://github.com/Neilpang/acme.sh
CERTbot client which implements ACME protocol: https://certbot.eff.org/
IETF ACME draft proposal: https://datatracker.ietf.org/doc/draft-ietf-acme-acme/?include_text=1