Intro
There is a very long discussion of this topic on Amazon.com. Sony BRAVIA models more than five years old may not work perfectly with Amazon’s Fire TV stick. I have this problem and I’ll mention my workaround.

The details
My Sony TV model is BRAVIA XBR 32XBR6. I suppose it’s about five years old. I also have it connected to a Sony Blueray player, which can also play Amazon Prime, Netflix, Hulu Plus, etc. But it isn’t nearly as well designed as the Fire Stick and so I bought the Fire Stick, which has better WiFi support and a faster user interface.

Initially the Fire Stick appears to work with the TV and all is good.

About the third usage, however, and when playing on-demand content I hear what I’m trying to play but I only see a blue screen with the letters HDCP. I think that indicates a digital copy protection mechanism has kicked in.

In my case I had the option to switch to watch the same content through my Blueray player (which never displays this problem). Then next time I went back to the Fire Stick (usually days later) all was good.

So I became suspicious about cause and effect and I shortened the cycle.

Get the HDCP problem. Switch HDMI ports to the Blueray player (using the remote). Initiate the Amazon video service connection on the Player (but don’t bother to actually play anything). Switch back to the Fire Stick’s HDMI port. HDCP problem gone!

This solution was not too painful. I also have a Raspberry Pi connected to yet another HDMI TV port. I’ll see if switching to that will do the trick as well – that would be a cheap option that’s not too painful.

2017 update
I never get this HDCP problem any more. The main difference is that I never use my Sony Blueray player for on-demand programming. The Firestick is superior so I always use it. I only use the Blueray player for DVD playback.

July 2019 update
Just go the latest and greatest: fire tv stick 4K on Prime Day a few days ago. On this same, now rather old Sony TV model mentioned above, it works really and surprisingly well! I thought surely this older model will not support newer features such as volume control – but it does. And surely it will not support power control of the TV – but it does! And since volume control works (and you can see it is controlling TV volume, not some kind of HDMI or other volume) of course the mute button also works. All these features had required me, up until now, to schlep around two remote controls: the one for the TV plus the Firestick. Now I’ll just need the one. I could probably use Alexa voice commands but I don’t think I’ll want to.

And, it’s just plain more responsive. Previous models were often a bit slow to react to key presses. This does much better on that front. One last thing, it comes pre-configured with your account already set up so you can be up and running much quicker.

I have no idea about the 4k-ness of the picture quality, but the other features alone make me glad I got it. 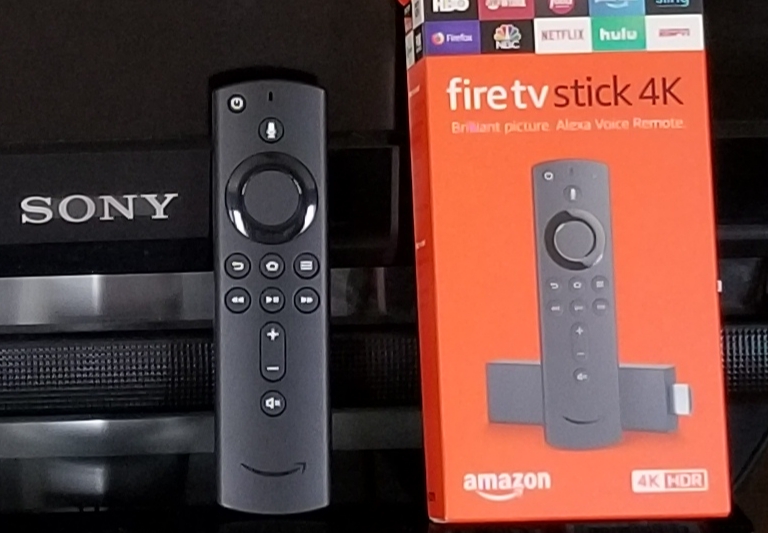 I wish I could answer all the questions raised in the comments but I just don’t have access to any of those models. I would think it ought to work with any Sony TV made in the last 10 years, but maybe it’s not so simple.

Upgrading to a newer Firestick – what to do with your old one
Now you’ve got a Firestick on all your TVs and you want that latest model, and your relatives don’t want your old one either even though it worked just fine. Around here we’d be tempted to send it to a second-hand store, or worse case, to an electronics recycling program. But remember it has all your logins to Amazon (for sure), maybe Hulu, HBO Now, AT&T Now, Netflix, etc. So you better take an extra few minutes to factory reset it. This is a terrific article that gives five different ways to reset your Firestick to factory defaults: Five ways to reset your Firestick. I just wanted to repeat one. You have to have it connected, unfortunately. Hold the right and back buttons of your remote simultaneously for at least 10 seconds. Then follow the prompts. I have tried it and it works. The reset itself takes about 15 minutes on an older Firestick.

Conclusion
A solution is offered to the dreaded HDCP problem for Amazon Fire Stick/Sony BRAVIA TV. More research needs to be done to reduce the solution to its essence.

References and related
Here’s the link to that lengthy discussion: http://www.amazon.com/gp/help/customer/forums/ref=cs_hc_g_pg_pg1?ie=UTF8&forumID=Fx1SKFFP8U1B6N5&cdSort&cdThread=Tx1A10FFQXCSZ2M&cdPage=1

Fire TV Stick (2019 model). This is the regular model. You probably don’t need the 4K model unless you have a super TV…

How to reset your (old) Firestick because you’ve upgraded: https://www.guidingtech.com/reset-fire-tv-stick-factory-settings/