What I’m Working on Now: building my own 3D printer

Intro
Because someone else on the team had a good experience with it, and so i can exchange notes and get some tips form them, I went ahead and ordered the Anet A8 3D printer + an extra roll of PLA. That is, despite the vocal negative reviews which exist.

Although normally I don’t consider myself very mechanical, I guess I’m pretty good at following instructions. So I’m watching their detailed Youtube video and mimicking their actions, step-by-step. And I’m having a blast! It’s like having an erector set all over again.

And I’m in constant awe that so much could be had for so little. There must be, what, a couple hundred parts, including five stepper motors, several limit switches, a circuit board, lcd, power supply, steel rods, belts, arylic(?) parts, and 0.5 Kg of PLA – all for $140?? I feel like its raw value is several times that. Hey, I just bought two m5 screws and nuts from Home Depot and paid almost $3.

Not exactly like the video
Things were going great, until the kit actually deviated form the parts shown in the video! Especially where the kit provided a two 3D-printed parts shaped significantly differently from what they show. Assembly slowed down after that.

The rods did not fit through the 3D parts as they should have – I had to bore them out a bit with one of the yet-unused threaded rods that came with the kit! Which did work by the way + a lot of muscle and hand strength. 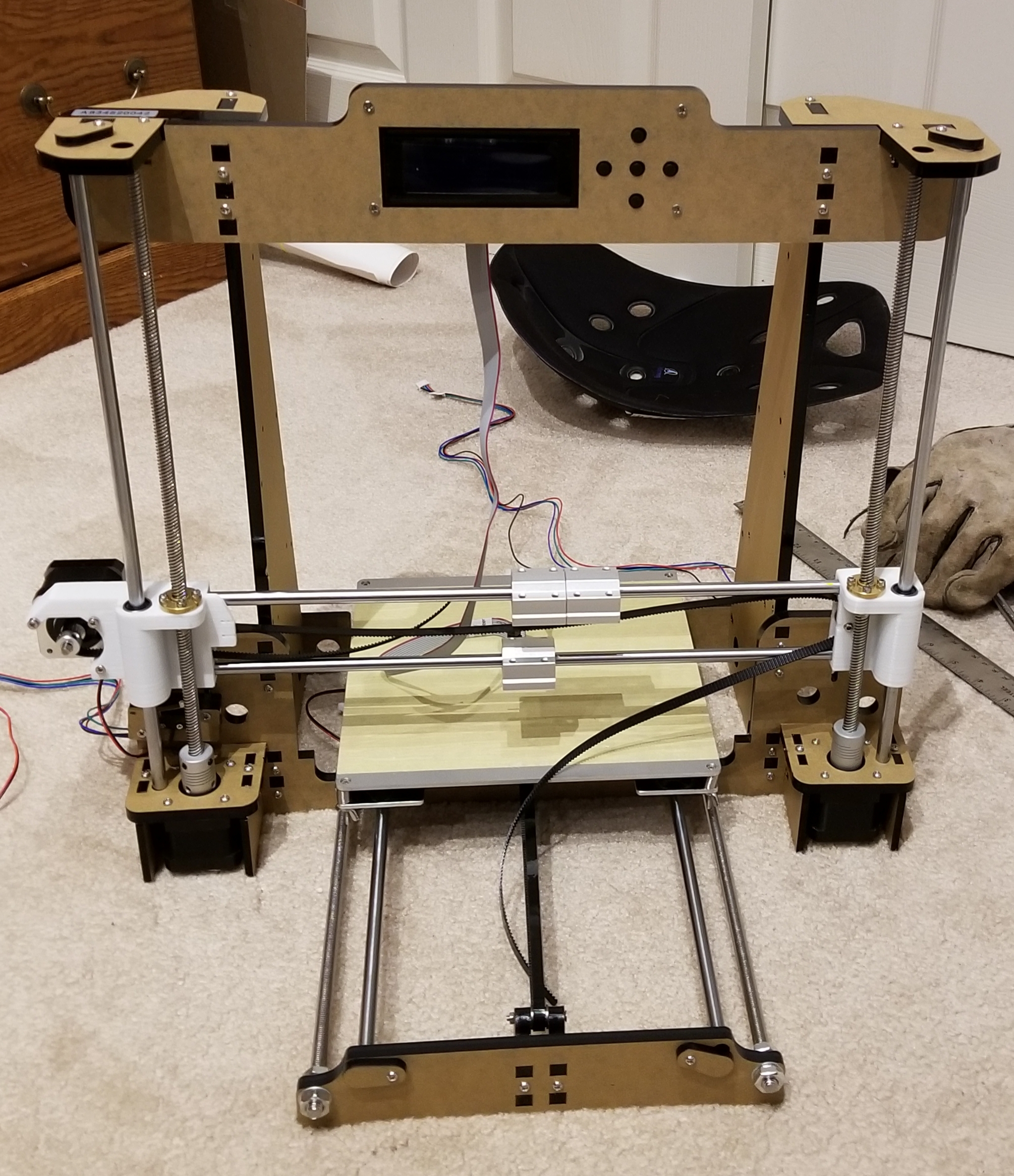 Partially assembled – extruder not yet inserted.

Many gray hairs later I finished the assembly. If you’re familiar with furniture assembly of a semi-complex piece like a desk with top shelves, this is about three times more complicated. You keep hoping that OK, now it’ll get easier and I’ll cruise through this. But it never does! Every stage features unique steps presenting their own unique challenges.

In my case my cooling fan on the extruder, which looks suspiciously like a 3D part, hangs below the extruder nozzle, so I don’t think I can use it.

Then once it was assembled my first test print, a simple box, went awry. Around the third layer the whole thing started moving around on the print bed! Once again I was hoping that the hard part was the assembly and then I could cruise to printing to my heart’s content. Wrong. Now comes a whole new set of challenges unique to 3D printing, and you have to master that as well. This is nothing at all like going to Staples to get an ink jet printer where the most challenging thing you’ll have to do is change an ink cartridge. Nothing at all like that. This is more like constructing a model railroad yourself.

Things get smoother
So I took everyone’s advice and installed Cura 3D as my slicer. Then I just decided to go for it and print out my first upgraded part: a center nozzle fan. It worked really, really well! 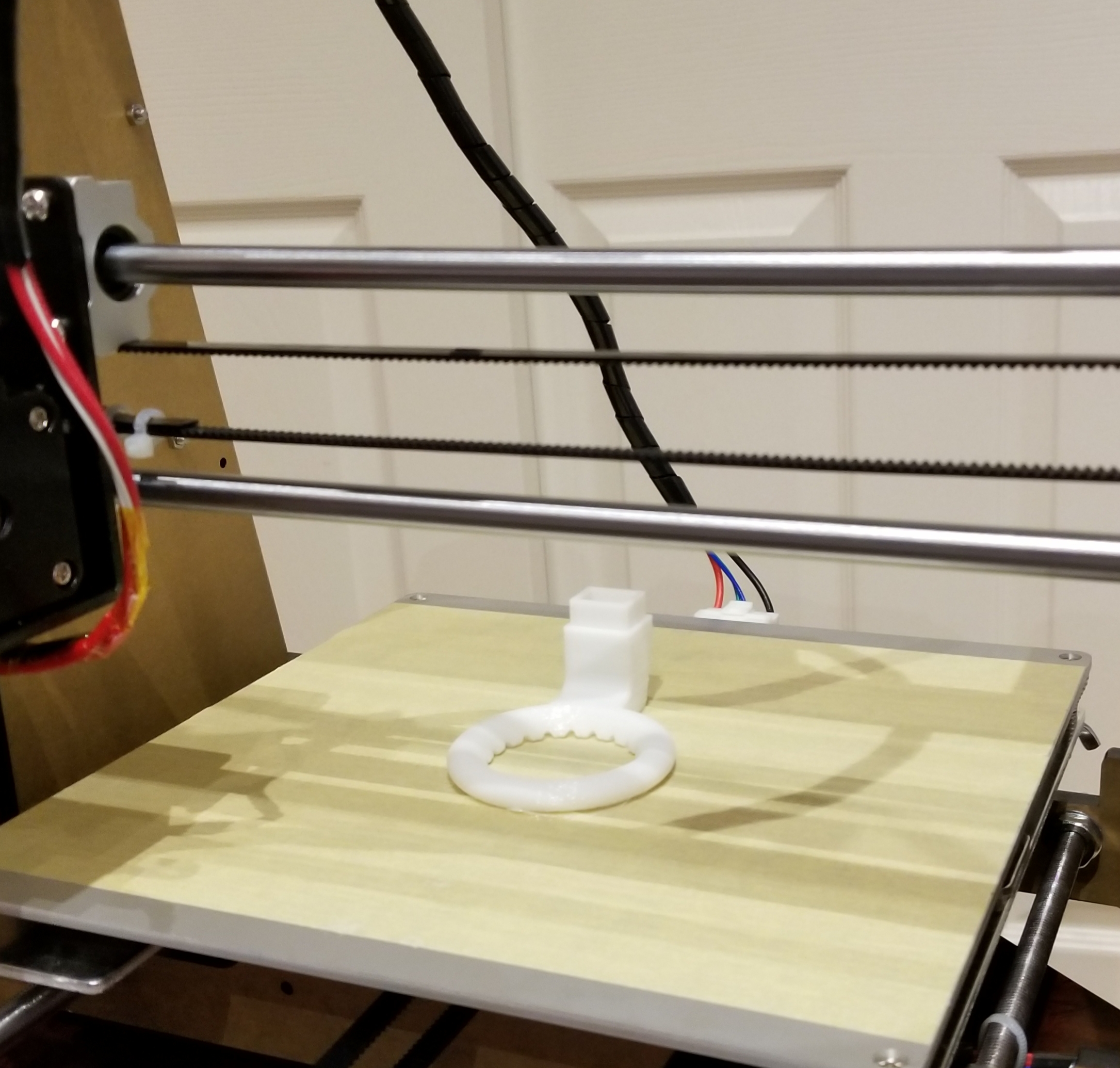 You can almost see form the picture that the quality was really good. I had to sandpaper the chute a little for it to fit – apparently ABS sandpapers easily – and voila, it snapped into place.

Next I printed a filament guide. Also no problems there.

Then my filament broke.

Some terms
slicer – software which takes an STL file an translates it into a series of layer-by-layer movements. Cura 3D is the slicer I use.
gcode – the file format that the anet a8 printer understands. You take an STL file, put it into your slicer, and have it produce a gcode file for you that you print.
PLA – the type of plastic most often used for 3D printing at home

References and related
Amazon link to what I purchased – now only $135! https://smile.amazon.com/gp/product/B01N5D2ZIB/ref=ppx_yo_dt_b_asin_title_o01_s00?ie=UTF8&psc=1

Note that the included microSD card has PDFs for assembly instructions, usage instructions and troubleshooting guide.

I am contemplating using openscad to build my 3D models. www.openscad.org. This is really good tutorial: http://www.tridimake.com/2014/09/how-to-use-openscad-tricks-and-tips-to.html

This entry was posted in Admin and tagged anet a8. Bookmark the permalink.