Pi-hole: it’s as easy as pi to get rid of your advertisements

Intro
I learned about pi-hole from Bloomberg Businessweek of all places. Seems right up my alley – uses Raspberry Pi in your home to get rid of advertisements. Turns out it was too easy and I don’t have much to contribute except my own experiences with it!

The details
When I read about it I got to thinking big picture and wondered what would prevent us from running an enterprise version of this same thing? Well, large enerprises don’t normally run production critical applications like DNS servers (which this is, by the way) on Raspberry Pis, which is not the world’s most stable hardware! But first I had to try it at home just to learn more about the technology. 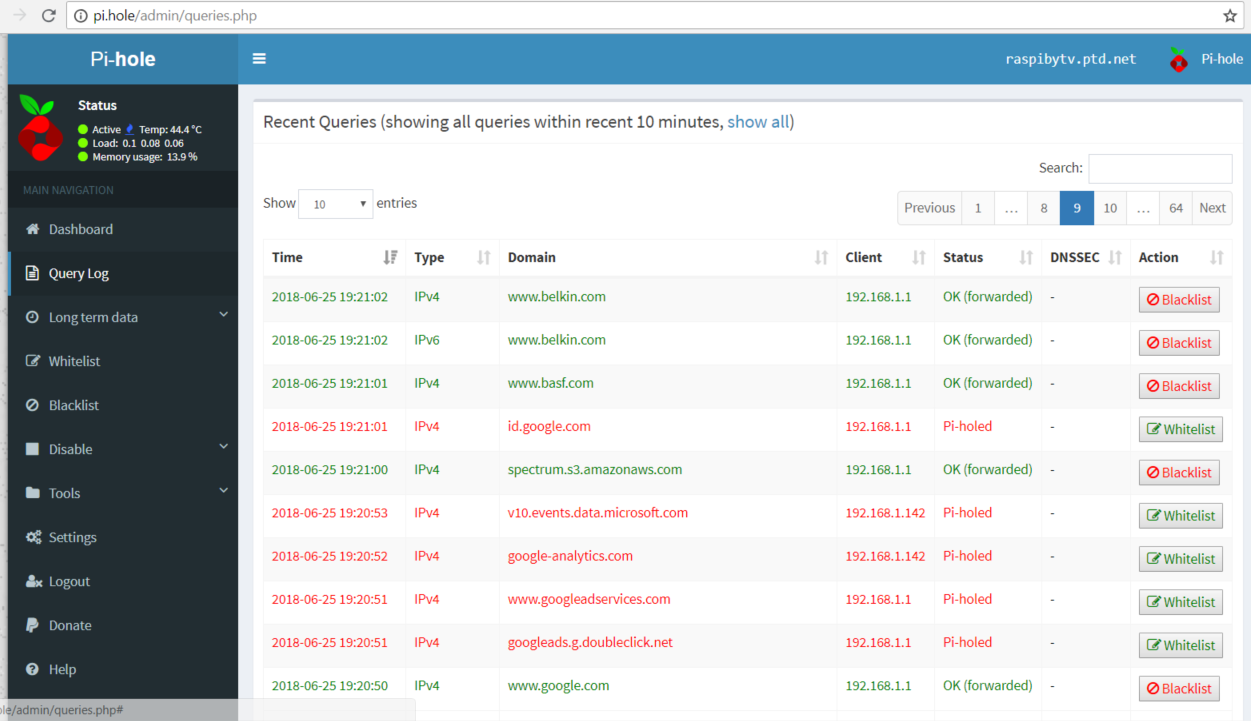 I was surprised just how optimized it was for the Raspberry Pi, to the neglect of other systems. So the idea of using an old SLES server is out the window.

But I think I got the essence of the idea. It replaces your DNS server with a custom one that resolves normal queries for web sites the usual way, but for DNS queries that would resolve to an Ad server, it clobbers the DNS and returns its own IP address. Why? So that it can send you a harmless blank image or whatever in place of an Internet ad.

You know those sites that obnoxiously throw up those auto-playing videos? That ain’t gonna happen any more when you run pi-hole.

You have to be a little adept at modifying your home router, but they even have a rough tutorial for that.

Installation
For the record on my Rspberry Pi I only did this:
$ sudo su ‐
$ curl ‐sSL https://install.pi‐hole.net | bash

It prompted me for a few configuration details, but the answers were obvious. I chose Google DNS servers because I have a long and positive history using them.

You can see that it installs a bunch of packages – surprisingly many considering how simple in theory the thing is.

Test it
On your Raspberry Pi do a few test resolutions:

$ dig google.com @localhost # should look like it normally does
$ dig pi.hole # should return the IP of your Raspberry Pi
$ dig adservices.google.com # I gotta check this one. Should return IP address of your Pi

It runs a little web server on your Pi so the Pi acts as adservices.google.com and just serves out some white space instead of the ad you would have gotten.

Linksys router
Another word about the home router DHCP settings. You have the option to enter DNS server. So I put the IP address of my raspberry pi, 192.168.1.119. What I expected is that this is the DNS server that would be directly handed out to the DHCP clients on my home network. But that is not the case. Instead it still hands out itself, 192.168.1.1 as DNS server. But in turn it uses the raspberry PI for its resolution. This through me when I did an ipconfig /all on my Windows 10 and didn’t see the DNS server I expected. But it wa all working. About 10% of my DNS queries were pi-holed (see picture of my admin screen above).

I guess pi-hole is run by fanatics, because it works surprisingly well. Those complex sites still worked, like cnn.com, cnet.com. But they probably load faster without the ads.

Two months check up
I checked back with pihole. I know a DNS server is running. The dashboard is broken – the sections just have spinning circle instead of data. It’s already asking me to upgrade to v 3.3.1. I run pihole -up to do the upgrade.

Another little advantage
I can now ssh to my pi by specifying the host as pi.hole – which I can actually remember!

Idea for enterprise
finally, the essence of the idea probably could be ported over to an enterprise. In my opinion the secret sauce are the lists of domain names to clobber. There are five or six of them. Some have 50,000 entries. So you’d probably need a specialized DNS server rather than the default ISC BIND. I remember running a specialized DNS server like that when I ran Puremessage by Sophos. It was optimized to suck in real-time blacklists and the like. I have to dig through my notes to see what we ran. I’m sure it wasn’t dnsmasq, which is what pi-hole runs on the Raspberry Pi! But with these lists and some string manipulation and a simple web server I’d think it’d be possible to replicate in enterprise environment. I may never get the opportunity, more for lack of time than for lack of ability…

Conclusion
Looking for a rewarding project for your Raspberry Pi? Spare yourself Internet advertisements at home by putting it to work.

References and related
The pi-hole web site: https://pi-hole.net/
Another Raspberry Pi project idea: monitor your cable modem and restart it when it goes south.