Setup
I decided to run an X Server on my Windows 10 laptop. I only need it for Cognos gateway configuration, but when you need it, you need it. Of course an X Server listens on port 6000, so hosts outside of your PC have to be able to initiate a TCP connection to your PC with destination port 6000. So that port has to be open. The software I use for the X Server is Mobatek XTerm.

Here is the Powershell command to disable the block of TCP port 6000.

The Powershell window needs to be run as administrator. The change is permanent: it suffices to run it once.

Conclusion
And, because inquiring minds want to know, did it work? Yes, it worked and I could send my cogconfig X window to my Mobatek X Server. I had to look for a new Window. It was slow.

Intro
This particular Powershell error I came across yesterday is not well explained in other forums. I present the error and the explanation though not necessarily the solution.

The details
I recently received my new PC running Windows 8.1. On rare occasions I use Windows Powershell to do some light Exchange Online administration, but I am a complete Powershell novice. I have previously documented how to get Powershell to work through proxy, which is also poorly documented. To repeat it here these steps work for me:

And that had always worked under Windows 7. Now this is what I get:

What’s up with that? I independently checked my account credentials – they were correct. Eventually I learned there is a winrm command which can shed some light on this. In particular this command show the problem quite clearly:

So even though I have local admin rights, and I launch Powershell (found in C:\Windows\System32\WindowsPowerShell\v1.0) as administrator, still this rights restriction exists and cannot as far as I know be overridden. The specific issue is that a GPO (group policy) has been enabled that prevents use of Basic authentication.

This produced the unhappy result:

So it seems that because I use a proxy to connect Kerberos authentication is not an option. Drat. Digest? Disabled in my client.

Solution
Unless the security and AD folks can be convinced to make an exception for me to this policy I won’t be able to use this computer for Powershell access to Exchange Online. I guess my home PC would work however. It’s in the cloud after all.

So I tried my home PC. Initially I got an access denied. It was that time of the month when it was time to change the password yet again, sigh, which I learned only by doing a traditional login. With my new password thnigs proceeded further, but in response to the Import-PSSession $exchangeSession I got this new error:

A quick duckduckgo search shows that this command helps:

And with that, voila, the import worked.

2nd solution
I finally found a Windows server which I have access to and isn’t locked down with that restrictive GPO. I was able to set up my environment on it and it is useable.

3rd solution
I see that as of August 2016 there is an alpha version of powershell that runs on CentOS 7.1. That could be pretty cool since I love Linux. But I’d have to spin up a CentOS 7.1 on Amazon since my server is a bit older (CentOS v 6.6) and (I tried it) it doesn’t run it correctly:

The instructions for installation are here.

Conclusion
Not every problem has a simple solution, but here I’ve at least documented the issues more clearly than it is elsewhere on the Internet.

Intro
I’ve used Windows PowerShell for all of a few hours so far. But, still, I think I have something to contribute to the community. The documentation on how to send commands through a standard http proxy is pretty miserable so I’d like to make that more clear. I plan to use PowerShell to administer Exchange online.

The details
Microsoft has some pretty good documentation on PowerShell in general. in particular for my desire to connect to Exchange Online I found this very helpful article. But that article says not a whit about sending your connection through an explicit proxy, which I found bewildering.

But I found some key documentation pages on a few related commands (TBD) which I eventually realized could be chained together to achieve what I wanted.

First I set up a credentials object:

This pops up an authentication window so be prepared with your Microsoft administrator credentials. 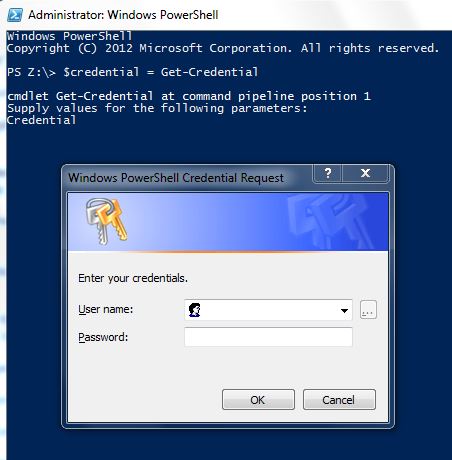 Next I make sure Internet Explorer has the correct proxy settings. Then I inherit them from IE like this:

I refer to this options object in the next command:

One more command to get things going:

Conclusion
Hopefully this posting helps to clear up what to do to make certain commands in PowerShell work through a standard http proxy. PowerShell, for a guy who’s only done BASH scripts, is actually pretty cool.

References
The basic idea of connecting to Exchange Online is contained here in this helpful Microsoft article, but you will find no mention of proxy whatsoever on that page. That part I figured out.